SHARK OF THE SKY

Shark of the Sky (SotS) is a hybrid rocket developed for participation in the 2019 Spaceport America Cup (SAC), 30000 ft SRAD (Student Researched And Designed) liquid/hybrid engine category. Building on the success of last year's rocket (UXO), design of SotS focused on mass reduction and engine improvements. SotS is powered by the Kismet hybrid SRAD engine, and achieved successful launch at the 2019 SAC.

The team developed a payload this year that assessed the properties of 3D printed parts with varying infills and materials such as PLA and PET-G during the flight of the rocket. By weighing these parts down with steel and aluminium loads, we were able to conduct an analysis on the viability of integrating 3D printed parts into future iterations of our rocket. Research and development also began on a solenoid-powered fluid system as a potential space industry application for pumping liquid oxygen and satellite cooling systems without the need for mechanical components.

Our research in fluids led to the development of the team’s submission for the Canadian Reduced Gravity Experiment Design Challenge (CAN-RGX). This scientific experiment conducted in partnership with the National Research Council and the Canadian Space Agency flew on board a Falcon-20 in microgravity to characterize the physics of ferrofluids and colloidal fluids under the influence of a magnetic field in microgravity.

The recovery system onboard SotS uses a dual deployment system consisting of a drogue parachute and a main parachute. A carbon dioxide canister-based separation mechanism deploys the drogue chute at apogee, to minimize shock loading. At 1500 ft AGL, pyrocutters actuated by electric matches release the main parachute. The system is housed insude the nosecone and a fiberglass tube directly below.

SotS is equipped with two COTS (Commercial Off-the-Shelf) altimeters for recovery deployment. A PerfectFlite StratoLoggerCF and a Featherweight Raven3 were used for increased reliability. Each altimeter is powered by a 9V battery and is armed immediately prior to launch. The deployment system includes dual redundancy, with two carbon dioxide ejectors, two pyrotechnic cutters, and both altimeters being capable of independently deploying the parachutes.

Because of the possibility of going supersonic, a Von Kármán nosecone with a 4:1 fineness ratio, built from fiberglass was selected for SOTS. Two mold halves were formed with MDF on a CNC router, and then joined during the layup to form the complete nosecone shape. The nosecone was post-cured at 50 °C for 6 hours, to protect against the hot desert temperatures.

SotS's oxidizer tank is built from 6061-T6 aluminium alloy and is 80" long, with a 6" outer diameter and 3/16" wall thickness. Twenty-four 1/4"-28 bolts join the bulkheads to the tube at each end with Buna-N o-rings, resulting in a minimum safety factor of 2.4, based on a maximum operating pressure of 1000 psi. The bulkheads feature hemispherical geometry, and improved airframe mounting structure, resulting in a 50% lighter mass than the previous year's design.

The combustion chamber houses the injector, solid fuel, and nozzle. The chamber is insulated with a 1/8" thick G11 fiberglass tube, and has a 5" outer diameter. It has been hydrostatically tested 1.5x the maximum expected operating pressure of 700 psi. Kismet burns a solid mixture of 90% HTPB and 10% powdered aluminium by mass. A pseudo-finocyl grain geometry achieved through investment casting is used for the fuel. Once the injector valve opens, nitrous oxide is sprayed through the system. The propellants combust and leave the nozzle, providing the rocket with thrust.

SotS uses a carbon fibre fin can holding 3 trapezoidal carbon fiber fins. Carbon fiber was chosen for its high specific stiffness and low mass. The fins were cut on a CNC router and bonded to the tube with a high shear strength epoxy.

A complete report of this project, including descriptions of onboard and ground support systems, engineering drawings of all rocket components, and a complete set of assembly and launch procedures for SotS can be downloaded here. 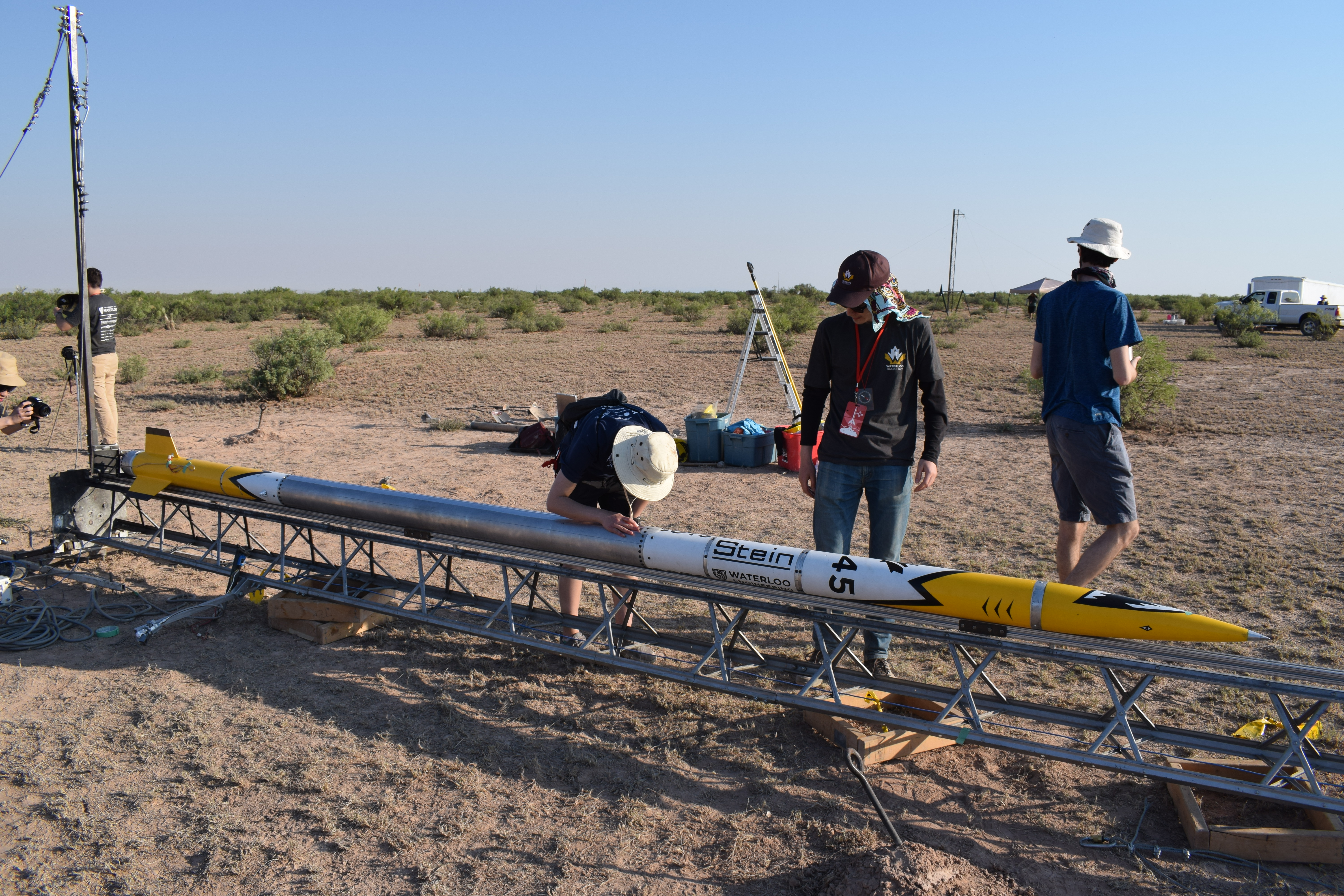 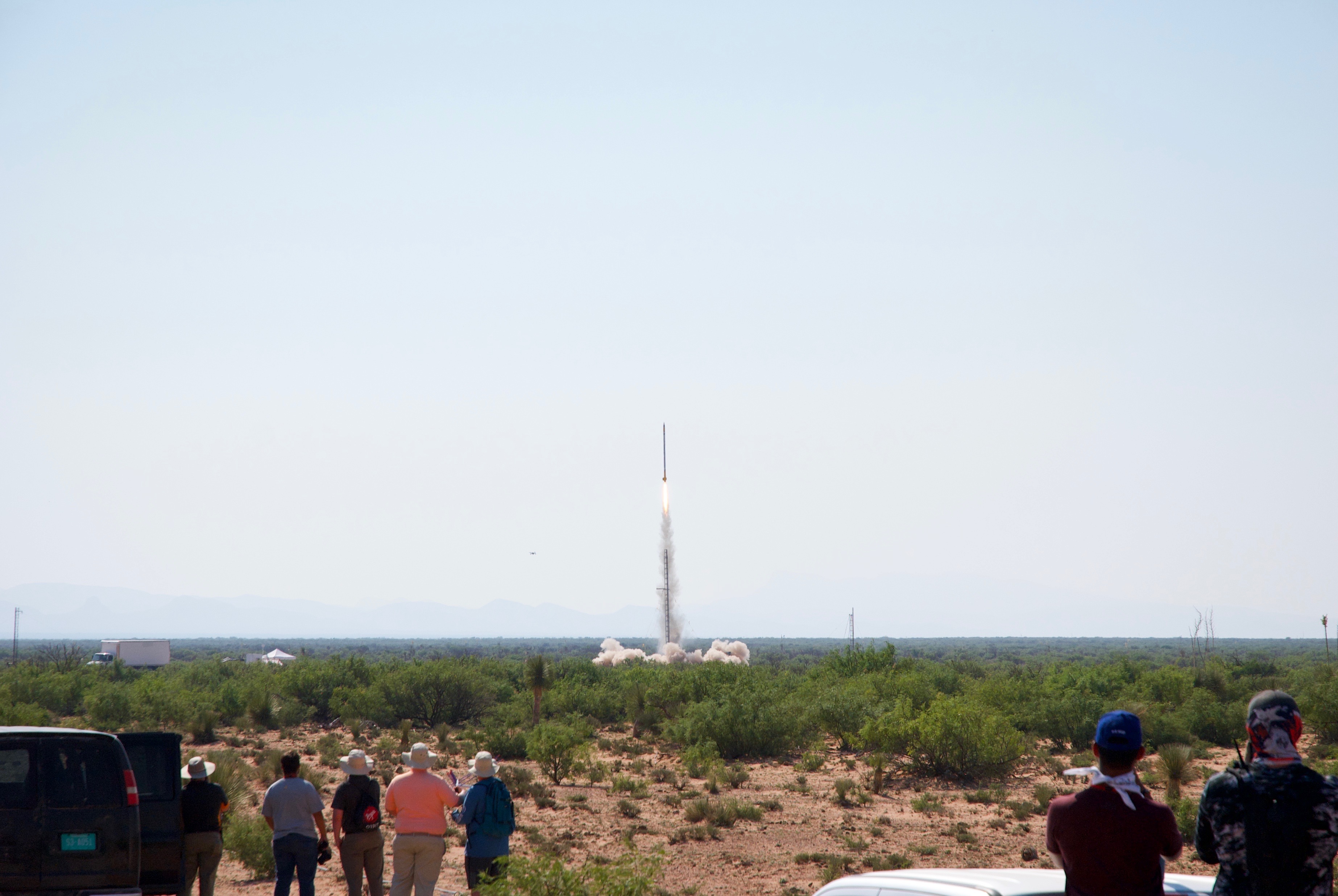 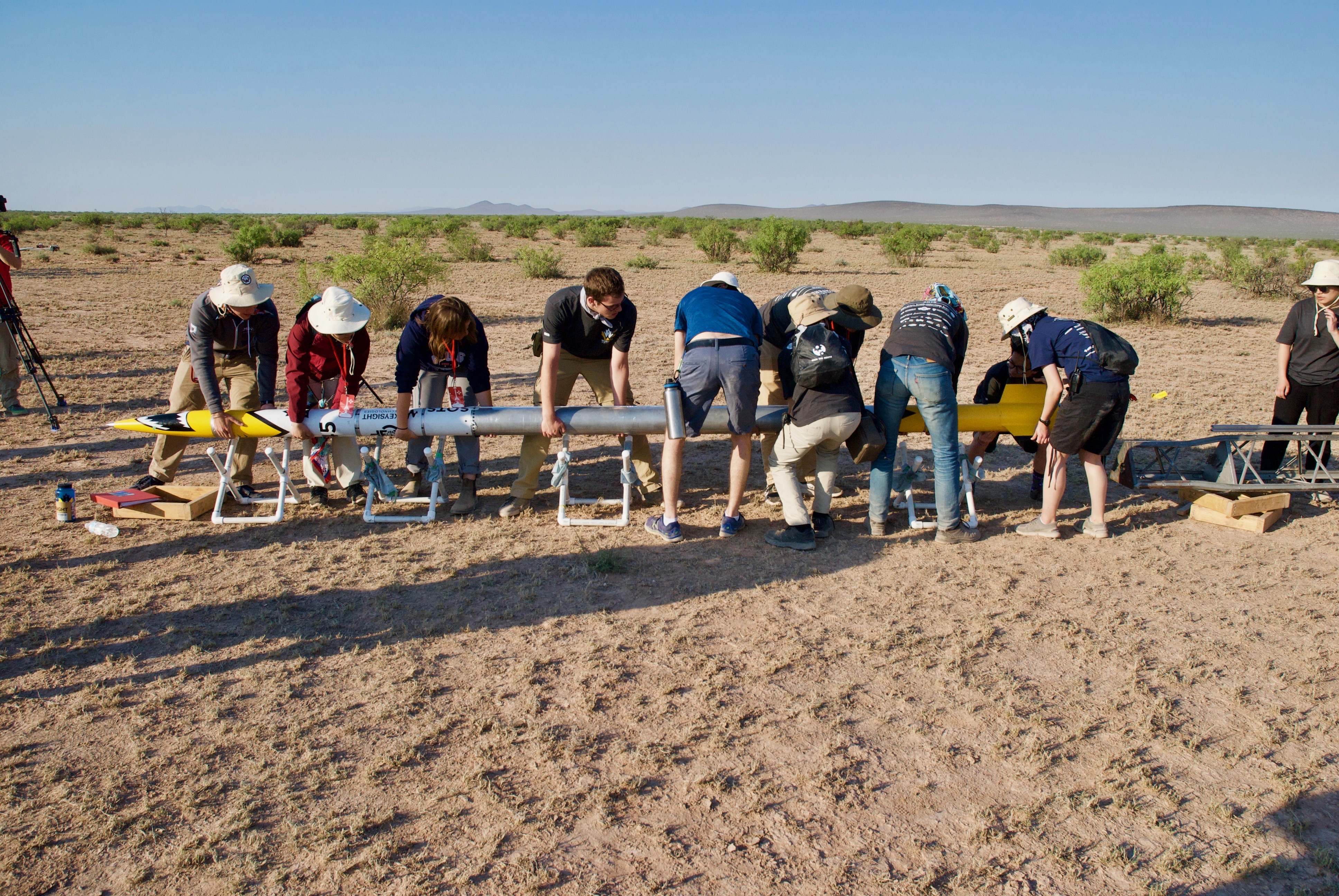